On 21 March 2003, the United States military forces crossed the border from Kuwait into Iraq on the first day of the ground war of Operation Iraqi Freedom. This movement followed a night of “shock and awe” in which American and British air forces had attacked Iraqi military positions in advance of the invasion. Staff Sergeant Eric Fidelis Alva was assigned to the 3rd Battalion, 7th Marines, when the unit crossed from Kuwait into Iraq. Three hours into the ground war, the Marine convoy halted its advance. SSgt Alva exited his vehicle and walked to the front hood to heat his MRE, something he had almost never done before. While returning to the side of the vehicle he triggered a mine which exploded beneath him. He had become the first injury of the war and was the war’s first Purple Heart recipient. In almost any previous war, that would have been the end of Eric’s story. The end of his life. But not in 2003.

What followed was a story of extensive trauma, horrible pain, endless surgeries, frustrating rehabilitation, and lonely moments where thoughts of death and despair were never far away. But Eric Alva persevered. He overcame obstacles and learned to live a new life missing his right leg. Something few of us can even imagine. He retired from the Marines with 13 years of service and began life post-military, inspiring others with stories of pushing beyond physical challenges and overcoming obstacles. Learning to snow ski and scuba dive, and helping others to do the same. And that, too, may have been the end of his story. But it wasn’t. Eric’s work, and his challenges, were not finished.

Coming out as gay was not an easy decision for a Texan from a deeply Hispanic culture. It was a challenge and there were many risks to being open about who he was, including the risk of rejection from the family who had been so supportive throughout his long ordeal of injury and recovery. But circumstances had placed Eric Alva in a unique position. The fight to repeal the Don’t Ask, Don’t Tell law, the military policy that denied LGBT people the right to serve in defense of our nation’s freedom, was looking for a champion, and Eric Alva fit the description. Once again, he crossed the line and took a dangerous step.

Eric Alva became one of the most compelling and inspirational champions of the effort to repeal DADT, speaking out as a gay Marine who had served proudly and sacrificed for his country. He served as the national spokesperson for the Human Rights Campaign’s fight to repeal the ban, speaking across the country and appearing on numerous television shows including Oprah Winfrey, Good Morning America, Anderson Cooper 360, and appearing in Newsweek, USA Today, as well as numerous other media across the country, including the cover of The Advocate. He testified before the House Armed Service Subcommittee. And on December 22, 2010, he stood behind the right shoulder of President Barack Obama as the president signed the legislation to implement the repeal of DADT.

March 21 is Eric’s “Alive Day,” a day often commemorated by the few individuals who share the traumatic experience of almost dying. It is not an easy thing, when nightmares still disturb sleep, or thoughts about “what might have been” can creep in, invoking sadness and loss. As his partner for a number of years, and his husband for 2, I know how deeply challenging this day can be for him. There is not much I can do to take away painful memories, and nothing I can do to restore a lost limb. But like so many military spouses, I do what I can to be supportive of someone who is not only my love but my hero. I know I join many, many people who give thanks that Eric Alva survived that day 16 years ago and went on to inspire so many lives, touch so many hearts, and create so much change in the lives of a people struggling for our hard-earned piece of the American dream of justice and equality. 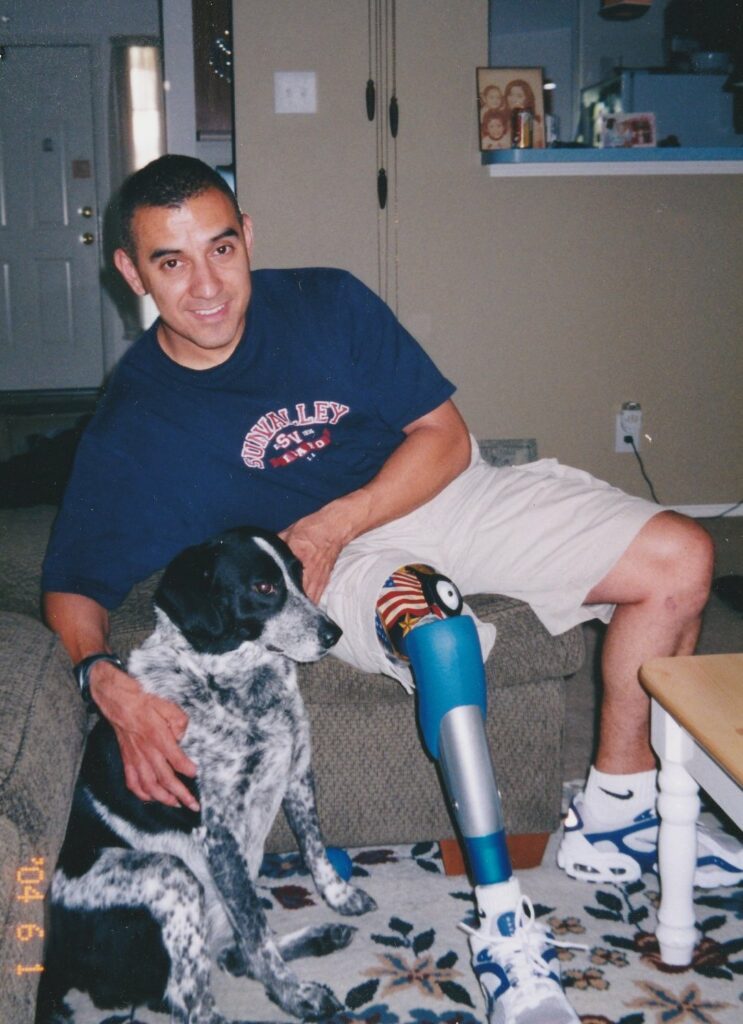 I love you, Eric Alva. I am so grateful for the story of your life, an on-going and unfolding story which I am now so deeply honored and blessed to share. Thank you for your courage, commitment, and dedication. Your kind and faithful heart. Your tenderness and laughter. Thank you for being you. A Marine. A Hero. A creator of change.

About the Author: Danny Ingram