In November 2011, I arrived at the Marine Corps Reserve Training Center in Cincinnati, Ohio, for my monthly reserve duty as the Company First Sergeant. As I walked in, I found the Battalion Sergeant Major visiting our unit to observe our weekend training, attend our annual birthday ball, and, unbeknown to me, provide me with information to conduct a mandatory training class for the unit.

The surprise was not that we were going to squeeze in yet another training class to an already full schedule, but that the training would be on the repeal of “Don’t Ask, Don’t Tell.” This was an interesting development since at the time, I was a closeted gay man serving his country under the prohibitive DADT policy.

I joined the military in the fall of 1982, following my graduation from high school. At that time, I think I had a clue about my sexual orientation, but I subconsciously chose to ignore it and follow the time’s societal norms. I had a girlfriend, and we became engaged with plans to marry after I completed my four years of active duty. Those four years came and went, and six weeks after my discharge, so did she.

Over the next couple of years, I began to realize who I was and want I wanted. The loss of the friendship and brotherhood I experienced in the military also continued to leave a void in my life. Although I knew the military was unaccepting of gay servicemen and women during this time, I kept my identity to myself and reentered military service.

Over the next two decades, I remained quiet and continued my military service, sometimes on active duty, sometimes serving as a reservist. In 1996, while on active duty, I met my husband — three years after Don’t Ask, Don’t Tell went into effect.

He had to remain in the shadows, and I was locked in the closet, whether I considered myself ready to come out or not. It was difficult to maintain the relationship under these circumstances, especially during several years of long-distance. Now that we’ve been together for 25 years, I look back and think about how much we missed out on and how much our lives together were restricted by my military career and my inability to be who I am without the threat of retribution. 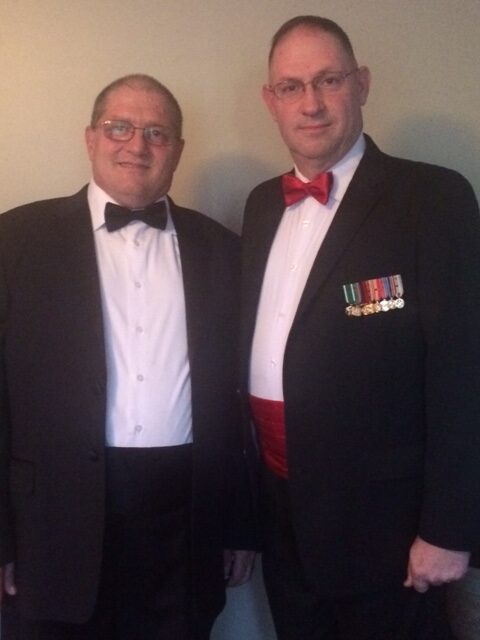 The author (right) and his husband

At one point during my career, I deployed for seven months overseas in 2005. At the time, I was the single parent of a 6-year-old child with special needs. Since I wasn’t able to acknowledge my partner to my unit, I had to provide a power of attorney for him to care for my son during my absence. However, given that he wasn’t associated with the military, he didn’t have access to certain things that may have made it easier while I was deployed.

I had planned to retire from the military in July 2012, so this November 2011 drill weekend would be my last Marine Corps birthday celebration before my retirement. At the direction of my Sergeant Major, I stood in front of my Marines providing instruction on the repeal of DADT. The policy was initiated because it was considered dangerous to morale and good order. This was the same premise used to restrict women from entering military service, and the same premise used to deny African Americans from entering military service.

Following the instruction period, Marines asked many questions about how things would change moving forward with the repeal. The simple answer was, things would not change. Marines would still work together, eat together, train together, and deploy together. There were, and still are, policies in place to account for any issues that could or would arise. Take, for example, a military policy on sexual harassment in the workplace. One can replace the specific gender pronouns contained in the policy with gender-neutral pronouns, and it still applies to all. Discrimination is discrimination; sexual harassment is sexual harassment. It is that simple.

That same night in November 2011 was our annual Marine Corps Birthday Ball. I had the honor of being designated the “oldest” Marine present and part of the ceremonial staff. For the first time in almost 30 years, I was able to stand center-stage, with the rest of the ceremony participants, in front of the company, as my authentic self.

It took a long time to get there, but I made it, and the Marine Corps finally accepted me for who I was. I retired eight months later, in July 2012. Fourteen months later, in September 2013, I married my best friend and the love of my life. Two years later, following the Supreme Court decision, our marriage became legal across America.

I know my story isn’t unique, and many other military members lived through this themselves. With the 10-year anniversary of the repeal of Don’t Ask, Don’t Tell coming up this year, I look back and see the struggles we endured, but I feel happy knowing that those who came after us got to have a better experience in the service and be who they are without closing off such a big part of themselves.

While I understand some feel they must continue to stay in the closet, it’s still wonderful to witness some of the LBGTQ community serve openly and be able to celebrate their lives together. To be able to date, marry, and openly share these joys with their friends and families.

On the anniversary of the repeal of “Don’t Ask, Don’t Tell,” I look back and wonder how things might have been different if it hadn’t loomed over us. But I consider myself lucky that I have a happy life with my husband, and now there is no hiding him or us away. I am certain others may also take a look back on their military careers and remember both the good and the bad times. Together we can all work together and continue to look ahead to a brighter future.

Michael Braswell is a former Marine who is currently working for the US Air Force as a NAF employee, serving as Assistant General Manager for Lodging Facilities, Al Udeid Air Base, Qatar. He is originally from Richmond, Virginia.

About the Author: Michael Braswell